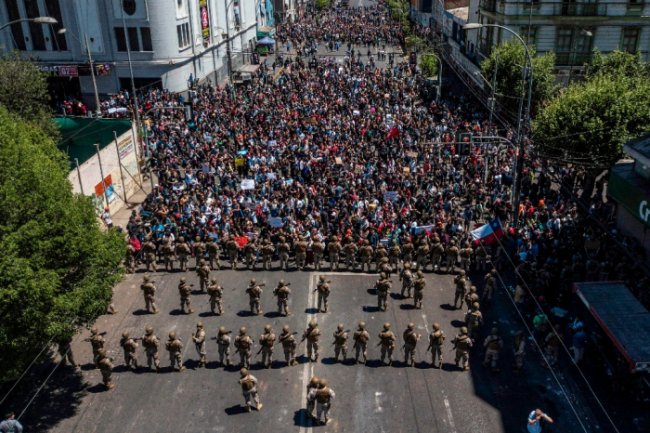 (Santiago, Ottawa) - Yesterday, members of a Quebec-based human rights delegation to Chile were presented with the report “Human Rights, Canadian Extractivism and Chilean Water” by the Chile-based Latin American Observatory of Environmental Conflicts (OLCA from its Spanish initials).

The “Canadian Observation Mission in Solidarity with Chile about the Human Rights Situation in the Context of Socio-Political Transition,” composed of parliamentarians, university professors, union leaders, and civil society organizations travelled throughout Chile last week to investigate the ongoing human rights abuses being committed by Sebastian Piñera’s government and counter the Canadian government’s silence on the now over 9,000 detained and 3,700 injured in ongoing protests since October 2019.

During the trip, the group met with the Observatorio Latinoamericano de Conflictos Ambientales (OLCA), an organization with decades of experience supporting communities defending their land and environments, and was presented with a report connecting Canadian economic interests in the mining and water and sanitation sectors to the ongoing protests and water crisis.

The report shows that between 50% and 70% of mining activity in Chile is Canadian, and 37% of the sanitation infrastructure is owned by Canadian interests (the Ontario Teachers’ Pension Plan is a majority owner of a number of companies in Chile). It goes on to highlight, referring to research by MiningWatch, that Export Development Canada (EDC) handed out over a billion dollars in loans to the mining industry in 2019 to expand massive water-hogging mines like Teck Resources’ Quebrada Blanca – loans which have continued to flow despite the ongoing political crisis and brutal repression – and describes the human rights and environmental abuses being committed at Canadian-owned mines.

Kirsten Francescone, Latin America Coordinator for MiningWatch Canada, commented, “This report is important for Canadians to begin to understand why the Trudeau government has been completely silent on the atrocities being committed in Chile. For too long has this government pandered to the interests of an industry that wreaks havoc on people and their environments at home and abroad.”

Bloc Québequois MP Simon-Pierre Savard-Tremblay in this facebook video, shared some of the report’s findings, speaking with disappointment and anger over the activities of Canadian mining companies and highlighting the complete lack of regulatory controls or oversight, federal financial support for mining, and the tax benefits companies receive from Canada.

“This will not become a dead letter, I will return and discuss all of this with my colleagues in the Foreign Affairs committee in the Bloc. The time of total impunity has come to an end. We will continue to act in solidarity with the people,” said Mr. Savard-Tremblay.

Lucio Cuenca, OLCA’s Executive Director, called on the delegation to share what it has learned. “Join Chileans in calling on the Canadian government to comply with its commitment to human rights and energetically condemn the human rights violations being instigated by the Piñera government, and to stop any new financing with loans from EDC to companies in the Chilean mining sector, be they Canadian or otherwise,” he said.

You can find the full report here in Spanish, with an executive summary in English. You can also find our in-depth reporting on the specific Canadian companies currently causing harm in Chile (in French, Spanish and English) here.