Struggling for land and water: resistances to tree plantations in Southern Chile

Different strategies to contest forestry extractivism in Chile show the complexity of these conflicts, with an overlap of present and historical political issues at different levels.*

Tree plantations are monocultures of a single tree species, typically fast growing species such as eucalypts, poplars, acacias and pines, designed to supply external markets for wood, charcoal, logs and pulpwood. In recent decades, tree plantations have expanded in Latin America, Africa and Asia to satisfy an increasing demand for wood-based products, especially for urban populations in the Global North. (See: wrm.org.uy/wp-content/uploads/2013/04/Pulping_the_South.pdf)

Chile now has three million hectares of Monterey pine (Pinus radiata) and Eucalyptus spp. plantations, concentrated in its central and southern regions. In 2013, Chile’s US$5 billion in forestry exports were primarily sent to China, USA and Japan. Tree plantations are an efficient form of forestry extractivism given their large scale, intensive exploitation, orientation towards exportation and low industrial processing needs.

As is the case with many of the world’s tree plantations, the state has been a significant actor in the expansion of monoculture forestry in Chile. Subsidies and cheap credit were given to forestry companies to facilitate infrastructure creation (such as sawmills and cellulose plants) and to grow the resource itself: between 1974 and 1994 the government paid 75% of pine and eucalyptus forestation costs, spending about USS50 million (Bull et al, 2009). As a consequence, forestry enterprises were able to accumulate vast tracts of land, and in the process squeezed out other agricultural activities as well as small landholders, peasants, agricultural-estate labourers and indigenous communities. Individual and communal landowners were also subsidised to plant trees, in order to enlarge the industry’s supply of raw materials.

Alongside these financial interventions, state violence and the criminalisation of protest were also important tools for increasing the number of hectares under cultivation. The largest expansion of the timber industry occurred during Chile’s 1973-1990 bloody military dictatorship, as was the case in Brazil and Indonesia, or in South Africa under apartheid (Gerber, 2011). The dispossession of the commons (land, water, forests) as well as the long-lasting impacts on livelihoods (reduced quality and quantity of water, pollution, forced migration and lack of work opportunities) have framed the mobilisations of, mainly, peasant and indigenous populations.

Worldwide, these conflicts are expressed by means of lawsuits and demonstrations, alongside direct action such as land recuperations (Gerber, 2011). The latter can include material damages and blockades to the industrial forestry activity. State-run special security forces are in those cases used to protect corporate tree plantations, which can often militarise the conflict. In Chile, several indigenous people have been jailed and tried under anti-terrorism laws, or have been assassinated while occupying their ancestral lands.

Figure 2: Upper left – “Look how they want to paint capitalism green!” Right: “There [in indigenous territory]… it has been green for quite a long time now”. The thought bubble depicts how tree plantations, bribery and state security force uniforms are all ‘green’. Source: OLCA.
As Figure 2 shows, states and private sector actors have used varied strategies for legitimising extractivism. Tree plantations in Chile were and still are justified as a way to control soil erosion and to prevent native forest degradation. But tree plantations have replaced native forests, pastures and agriculture lands, while failing to control erosion due to their need for extensive clear-cutting (see Figure 1). Recently, forestry enterprises have further deployed the language of “environmental values”, using for example claims of carbon capture and sustainable development to prove their social and environmental responsibility. Some local communities have denounced this “greening” of extractivism as a way in which corporations seek to be internationally legitimised while maintaining land control through violent practices. The provision of wage labour for marginalised communities is another argument that states and corporations use to legitimate forestry extractivism. In reality, however, labour opportunities are scarce in sawmills and cellulose plants, while forestry employment in rural areas is rather rare, outsourced and temporary.

The practices of forestry extractivism facilitate the accumulation and concentration of capital, land, and especially power- a process known as accumulation by dispossession (Harvey, 2004; see also Chapter on Commons of the Manual). This concept explains how dispossession is made possible by the appropriation of public and communal resources for the benefit of capital accumulation. In Chile this has happened through direct state subsidises for planting and through the privatisation of the cellulose factories and paper mills that were established by the state between 1964 and 1973. Promoting and protecting the industry of forestry extractivism has in these terms necessitated the subordination of indigenous peoples, the working class and the environment under the imperatives of capital and of power concentrated in the hands of a select few.

Globally, indigenous people tend to be at the forefront of conflicts over tree plantations, as large-scale private landholdings concentrate power, displace local residents, incur water shortages and skew local uses of natural resources (Gerber, 2011). The extractivist forestry model in Chile has been primarily contested by indigenous Mapuche. The Mapuche see forestry enterprises as the third wave of colonisation of their territory, after the Spanish in the 16th century and the Chileans in 1861.

In their historic struggle for the recuperation of ancestral territory and sovereignty (self-referred to as “in resistance”), Mapuche communities perform what they call “land recuperations” since the 1990s. These land occupations of corporate forestry plots are effective exercises in retrieving territory by means outside of formal proceedings and state-defined legality. These action have been accompanied by other strategies to regain control of indigenous territory, including claims for the restitution of ancestral lands filed under Convention 169 of the UN’s International Labour Organisation, negotiating with state representatives and forestry enterprises to reach agreements where the state buys privately held land then hands it over to the Mapuche, and road blockades and/or material damages to corporate properties. 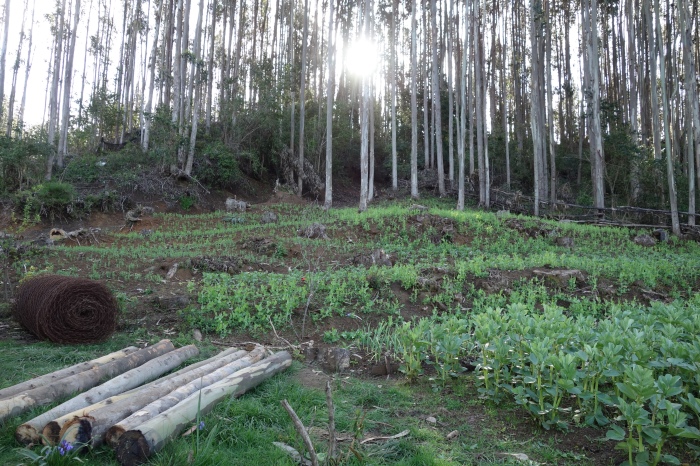 Figure 3: Beans now grow where before grew Eucalyptus sp. in the areas slowly recuperated by Mapuche communities. Source: author.
In performing territorial recuperations, Mapuche express their spiritual worldview of connection to the land: they are socialising through customary and traditional forms of community-making, based on kinship and friendship. When a plot is recovered, communities organise themselves -either collectively or by household- and plant potatoes, wheat, beans and peas, recuperate their extensive livestock practices, collect fruit from the remaining native forest and decide to what extent they want to engage with tree plantations. The process is both physically and emotionally exhausting, especially as they are often exposed to violence and criminalisation. Sustaining recuperated lands is not easy given the precarious environmental conditions in terms of water availability, soil fertility and loss of biodiversity after conversion into tree monocultures. Impoverished Mapuche communities also face the difficulty of fully expressing their own worldviews which depend on spiritual, emotional and livelihood relationships with native forests. Yet, the active resistance of Mapuche communities in certain areas of Southern Chile has been discouraging private corporations to continue or expand their extractivist activities.

Resistance framed through policy: reforming the Water Code to transform the forestry sector

Tree plantations (and specially Eucalyptus spp.) capture rainwater retained in soils, causing a decrease in flow rates and runoff during summer periods. Long term impacts regarding quality and quantity of water have been documented in several countries after the establishment of tree plantations. In face of these negative impacts, the Agua que has de beber (Water that you have to drink) initiative uses a different strategy for contesting the impacts of forestry extractivism. Developed by the Association of Forest Engineers for Native Forests (AIFBN) and funded by the European Union delegation in Chile, the initiative seeks to join diverse social actors to influence and implement public policies that prioritise human uses of water over industrial applications.

The initiative is seeking to put the reform of the Water Code on the agenda of recently re-elected Chilean President Michelle Bachelet. The current Water Code, signed during the Pinochet dictatorship in 1981, created a system of water rights that can be traded with few restrictions. In such context, extractive industries such as mining or agriculture profit from the accumulation of water rights. Forestry extractivism instead seizes water merely through the physiological activity of trees. The discussion on water rights could thus have no effect on what happens in areas where tree plantations are extensive.

In Southern Chile, the role of the “Agua que has de beber” initiative has, therefore, been to analyse and publicly criticise institutional solutions to mend seasonal water scarcity (such as providing water to rural communities by tank trucks or building new infrastructure like wells and reservoirs). These governmental proposals to solve water scarcity are disconnected from spatial planning policies as neither the temporal nor long term solutions consider the varied land ecologies and the way those affect water access. The dissemination of academic publications on the relationship between tree plantations and water shortages confirm the validity of local rural knowledge, and has been crucial to argue against state and private discourses that seek to legitimate extractivist forestry.

Lessons for the political ecologist mobilisation regarding tree plantations

These examples of strategies to contest forestry extractivism in Chile show how complex these conflicts are, with present and historical political issues overlapping at different levels. In the face of this complexity, there are various ways in which both dispossession and resistance are expressed. Tree plantation conflicts in Chile can provide some useful lessons or tools for movements facing similar environmental, land or forestry conflicts:

* This post is one of the chapters from the Political Ecology for Civil Society. It is based on Marien González Hidalgo’s contribution “Ecologies of Conflict: between dispossession and resistance amidst tree plantations in Southern Chile”, included in the chapter on environmental conflicts. We are eager to receive comments from readers and especially from activists and civil actors themselves, on how this work could be improved, both in terms of useful content, richness of examples, format, presentation and overall accessibility.