The Environmental Impacts of “Green” Technology 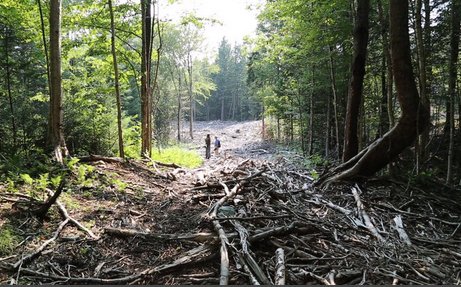 Solar panels, wind turbines, and electric cars have long been touted as solutions to the climate crisis.

The “green” image attached to these technologies masks a dark reality; they are adding to the problem of environmental destruction, failing to reduce CO2 emissions, and accelerating the mass extinction of life on the planet.

In my upcoming film Bright Green Lies, based on the book by the same name, I take a critical look at the industries that claim to be about saving the planet.

60% of the European Union’s “renewable” energy comes from biomass. Forests across North America are being clear cut and shipped across the Atlantic to be burned for electricity. Biomass is inaccurately counted as carbon neutral, when in reality emissions from biomass plants can exceed that of coal fired power plants. The burning of wood in Europe is subsidized to the tune of nearly 7 billion euros per year.

Dams have been called “methane bombs” because they produce large amounts of methane. They also harm rivers by increasing the water temperature and blocking the passage of fish who swim upriver to spawn.

So-called “renewables” like solar panels and wind turbines are made of finite materials that require mining. The materials that go into creating “green” tech range from copper and steel to concrete, sand, and rare earths. In Baotou, China, a dystopian lake is filled with toxic waste from rare earths mining. Fossil fuels are burned throughout the production process.

Wind turbines in the US kill over 1 million birds per year. Bats who fly near the turbines can die of barotrauma – their lungs exploding from the pressure differential caused by the blades.

A proposed lithium mine in northern Nevada currently threatens 5000 acres of old growth sagebrush habitat. The industry calls this a “green” mine because the lithium will be used in electric car batteries. I doubt the golden eagles, sage grouse, pronghorn antelope, rabbitbrush, or Crosby’s buckwheat who call the area home would agree. The mine would burn around 11,300 gallons of diesel fuel and produce thousands of tons of sulfuric acid per day.

There are plans to mine the deep sea to extract the materials for electric car batteries and “renewable” energy storage. It is predicted that each mining vessel would process 2-6 million cubic feet of sediment per day. The remaining slurry would be dumped back into the ocean where it would smother and burry organisms, toxify the food web, and potentially disrupt the plankton who produce two thirds of earth’s oxygen.

These are just a few examples of the environmental harms associated with “green” technology. To scale up the production of these technologies would require increased mining, habitat destruction, global shipping, industrial manufacturing, and the production of more toxic waste. “Renewables” are predicted to be the number one cause of habitat destruction by mid-century.

So-called green technologies both emerge from and support the industrial system that is destroying life on the planet.

We have been told a story that there is a baseline demand for energy, and that if this demand could be met with so-called renewables, fossil fuel use would diminish. This story runs contrary to the entire history of energy usage. Historically, as new sources of energy have been added to the grid, old sources have remained constant or grown. Instead of displacing each other, each additional source stacks on top of the rest, and industrial civilization becomes more energy intensive.

We see the same pattern today, in the real world, with the addition of so-called renewables. On a global scale, “green” technologies do not even deliver on their most basic promise of reducing fossil fuel consumption.

All the mining, pollution and habitat destruction simply adds to the harm being done to the planet. Nothing about the production of “green” energy helps the natural world.

The push for “green” energy solves for the wrong variable. It takes a high-energy, high-consumption industrial civilization as a given, when this is precisely what needs to change if we are to live sustainably on this planet.

The real solutions are obvious; stop the industries that are causing the harm and allow life to come back. Fossil fuels need our opposition. So do lithium mines, rare earths mines, copper mines, iron mines, and industrial wind and solar facilities. Fracking should not be tolerated. Neither should biomass plants or hydroelectric dams.

Forests, prairies, mangroves, seagrasses, and fish have all been decimated. They could all sequester large amounts of carbon if we allowed them to recover.

While making my first documentary, Sea of Life, I visited the village of Cabo Pulmo. The ocean there had once been heavily overfished, but within ten years of creating a marine protected area, the biomass – the mass of life in the ocean – increased by over 450%. When I arrived, 20 years after the marine reserve was created, I found an ocean that was teeming with fish.

Life wants to live. If we can stop the harm, nature will do the repair work that’s necessary. But there are limits to how far things can be pushed, and we are running out of time. Up to 200 species are going extinct every day. The destruction of the world is accelerating, thanks in part, to the very industries being touted as “green”. With life on the planet at stake, we cannot afford to waste time on false solutions.

Julia Barnes is the director of the award-winning documentary Sea of Life.